Please also see Norman Mackie's article for his history of the Porte Cinema.

The Porte Cinema was built in 1915. It closed in 1939 on the opening of its much larger and more luxurious replacement, the new Palace Cinema at the other end of the High Street. In the 1950s and 1960s the Porte building was used for storage, notably by Pickfords, and it is still referred to locally as 'the Pickfords building'. It then served as an amusements arcade, run firstly by the Salvona family and subsequently by John Cooper. More recently, Mr Cooper sold the building to a local developer, Bob Wilkie. Before the sale, Mr Cooper did the town a service by painting the façade.

During the course of 2002, there was extensive discussion within Burntisland of Mr Wilkie's plans for the Rose Street/Thistle Street area. These involved the complete demolition of the Porte Cinema. The plans met with general approval. Although the Porte Cinema was not as great an eyesore as the Palace Cinema, it was far more prominent - and Mr Wilkie was suggesting that the cinema site could be used for a modern block of flats of significant architectural merit. So far, so good, as far as most folk were concerned.

The old cinema was not a listed building, but it was in a conservation area. However, Historic Scotland had raised no objection to the demolition plans in 2002. Then, early in 2003, they reappeared on the scene. In a remarkable U-turn, they declared that the Porte Cinema was indeed of historic significance - it was, after all, one of Scotland's first purpose built cinemas, and at the very least the façade must be retained. This caused considerable alarm in the town, because now the redevelopment scheme for the entire area was in jeopardy.

However, the interested parties got their heads together again, and Mr Wilkie produced revised plans for the area. These included the retention of the shell of the Porte Cinema, within which he would create several modern apartments. Garages would be included at ground floor level, with access from Rose Street. Again, the plans met with general approval and the development went ahead. 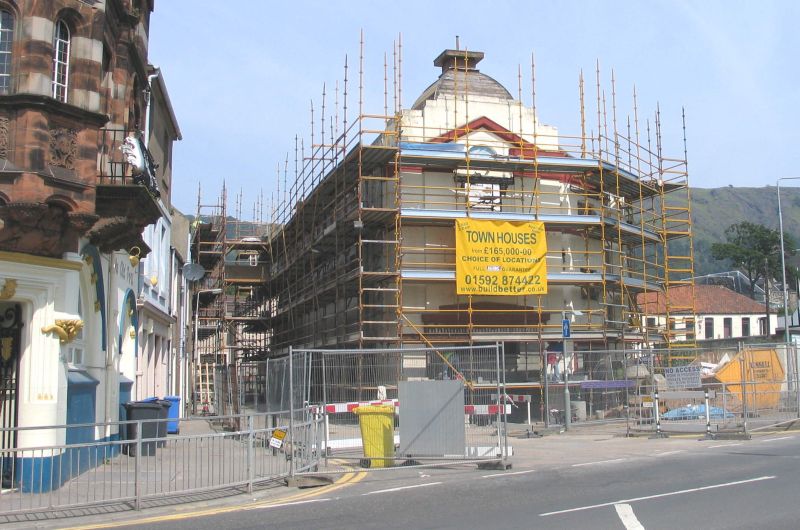 The Porte Cinema in July 2005. Work is well under way on the internal conversion to apartments.

Memories of the Porte Cinema

Writing in the Autumn 2004 issue of the Burgh Buzz, Mrs Betty Duckworth (née Johnston) of Kirkcaldy recorded her memories of the Porte: "My family had moved temporarily to a tenement house in Somerville Street when I was about ten or eleven. In the same building lived my pal of that time (Jenny Moodie). Our Saturdays were always the same. About 1.30 we made our way up Union Street and crossed over to the fruit shop directly opposite. Every week we bought the same, a ha'penny spoiled fruit and a ha'penny worth of peanut brittle. The spoiled fruit was usually an apple with a bash in it (we knew the assistant). Then along to the cinema with our tuppence entry. At 2.00 the show began and you could tell how much the children enjoyed it by the noise they made. Sometimes there was singing with the words on the screen and a bouncing ball jumping over the words. I remember 'Tiptoe through the Tulips' was one and 'Song of the Nile', and the one all the children liked was 'I scream, you scream, we all scream for ice cream'. The show finished dead on 4.00 and the cinema emptied by side and front doors. Incidentally the cinema was just the width of the screen and I've heard it alluded to as the coffin and I also heard someone say it was like looking at a picture up a close. Anyway the young ones had no fault to find."

We'd be delighted to have other memories and/or photos of the days when the building was a cinema. Apparently there were elegant steps at the front of the building, and it looked far more impressive then.