(Sadly, Isabelle passed away in August 2019. Her brother Malcolm has inherited Isabelle's
Derrynane collection and can be contacted via Burntisland Heritage Trust.) 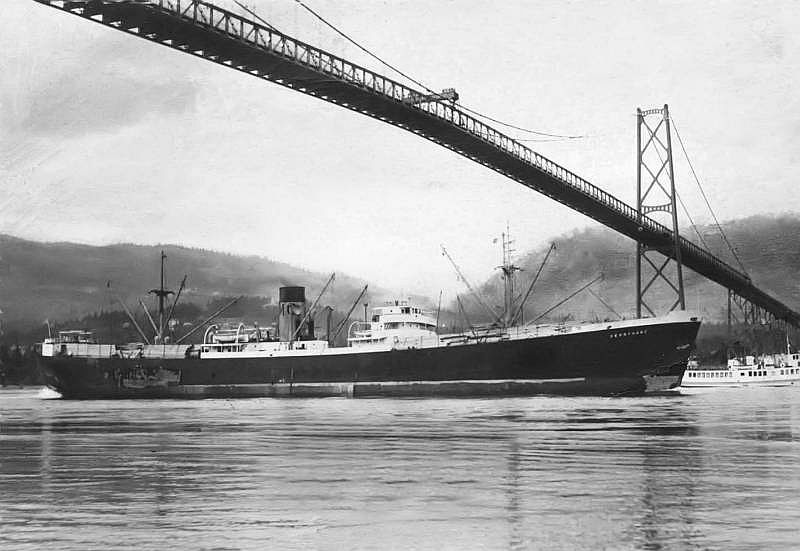 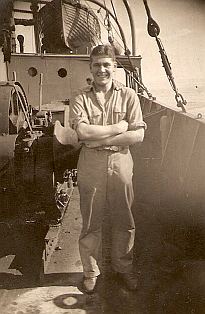 The S.S. Derrynane unfortunately had a very short working life. After only two years in service, she was sunk on 12 February 1941 by the German Heavy Cruiser, Admiral Hipper, under the command of Commandant Wilhelm Meisel. She had left Freetown, South Africa, on the 30 January 1941 in convoy SLS.64, that originally had consisted of 22 ships of Norwegian, Greek and British origin. At the time of the Admiral Hipper attack, there were 19 vessels. Seven of the 19 were sunk with huge loss of lives. All hands on the Derrynane were lost at sea (36). The Germans claimed that 14 vessels from the convoy were sunk. Meisel received the Knight's Cross on his return to Germany.

This research has been undertaken in memory of my father, Magnus Robb (pictured right on the Derrynane) from Burntisland, who not only worked on the construction of the Derrynane, but also sailed on her. He joined her crew as 4th Engineer in August of 1938 and left her in April of 1940 to work in the shipyards in Leith, Edinburgh. He died in 1991 from Asbestosis (Lung Cancer), probably as a result of exposure to the asbestos that was used to lag Engine Room pipes. I have a collection of postcards that he brought back from his travels. My Father thoroughly enjoyed his years in the Merchant Navy and would say, Ive been all over the world, and many other places. Also in my possession are photographs of Derrynane crew members. I am currently trying to trace their relatives so that I can send them the photographs.

The Derrynane's war service 1939-41
(From the Arnold Hague Convoy Database, with the kind permission of Don Kindell)

Further information can be found on Mike Holdoway's Convoy Web. There are excellent photographs of the Admiral Hipper at Maritime Quest. Those lost in the attack on the Derrynane are commemorated on Panel 35 of the Tower Hill Memorial in London.

My father and some of his siblings were used as models in Andrew Young's painting, The Bridge of Life, that now hangs in the Court Room of Burntisland Burgh Chambers. His brother, Al, was the model for the young fellow playing the recorder; his sister, Meg, was the Bridesmaid in blue; and my father was the young boy with the drum, right at the end of the procession.