While the shale oil works at Binnend are largely forgotten, the village which was built to serve them is not. There are quite a few folk, in Burntisland and elsewhere, who have treasured memories of the days when they lived or holidayed there. (See Memories of the Binn Village)

The building of the Binnend village was part of the general expansion following the change of ownership of the oil works in 1881. The village was in fact in two parts - the High Binn at the old Binnend Farm, and the Low Binn close to the main road and east of the oil works. Both are marked on the map. Over the years, the Low Binn tended to be thought of as the poor relation and a "lower class" settlement - perhaps as a result of its more transient population. The Low Binn is pictured right in about 1914 (picture courtesy of Keddie Law); please see below for pictures of the High Binn.

It is likely that both parts of the village were built around the same time, although it is the High Binn whose memory lives on, and to which people are generally referring when they speak of the 'Binn Village'.

We can get some idea of the village's population in its early days from the 1891 Census, taken when the oil works were still a force to be reckoned with.

The bare statistics show that the High Binn had a population of 564 at that time, crammed into 95, mainly two roomed, houses. The population of the Low Binn was 192, in 33 houses. Overall, thirty per cent of the heads of household were Irish, with most of the rest born in Fife or the Lothian shale mining areas. Some of the houses were so overcrowded that the beds were used on a shift system, 24 hours a day; and some slept in the space between the ceiling and the roof.

In 1889, the High Binn acquired a Free Church Mission Hall, which seems to have served all denominations; and in 1891 it got its own school. At that time, there were around 170 children of school age. The village had a football pitch, nestling at the foot of the shale bing, and home to the Binnend Rangers. The Mission Hall, the school and the football pitch are all shown on the map.

Many of the incomers were Catholics. Their services were held in the Burgh Chambers, and from 1886 in the Lochies Road school (now the Sands Hotel).

There were two small shops in the village, but the inhabitants went to Burntisland for most of their messages. Those of the shale workers who had come from Broxburn and West Calder had brought with them the principle of co-operation, and they were the driving force behind the establishment of Burntisland's first Co-op store in Harbour Place, which opened in 1884.

When the oil works employees were paid off in 1893, Binnend village remained a going concern, although its permanent population began to decline.

There was a brief revival during the First World War, when troops and dockyard workers occupied houses and the school. And when the aluminium works and the shipyard opened in Burntisland around the end of that war, the village provided good low cost homes for a number of the incoming workers.

In the inter-war years, the decline in the permanent population continued. But many of the houses found a new role as holiday homes for folk from Edinburgh, Glasgow and other parts of Scotland. Basic they might have been, but visitors from the cities loved the fresh air and freedom. The large number of Binn village postcards from that time are now invaluable as a permanent historical record of a lost village. 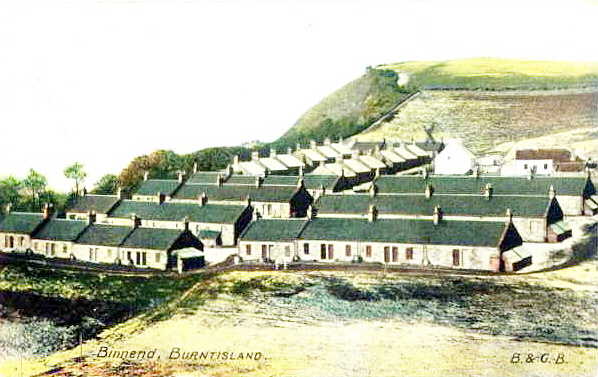 Above  The High Binn. The handwritten X refers to the timeless postcard message, in this case from Granny to the folks back home in Carluke: Ive put an X beside the house Im staying in. Thanks to Johnston & Jeanette Wood for lending us the postcard.
Below  The (almost) deserted village - the High Binn photographed in 1953. The last resident left the following year. Some fragments of the houses are still visible today, among the undergrowth. 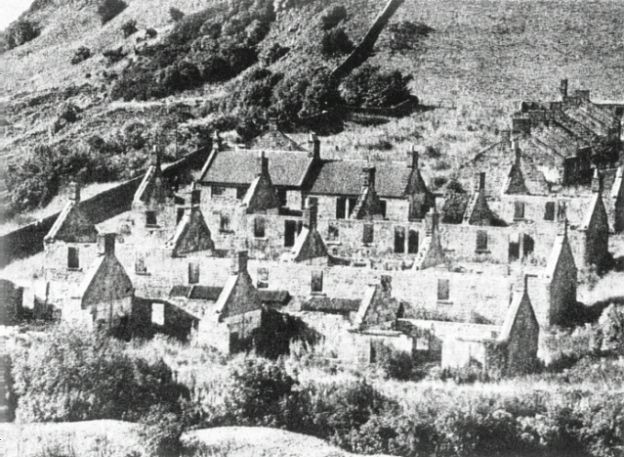 The absence of basic facilities led to the formal closure of the village about 1931, although some residents insisted on remaining, despite the lack of piped water, gas, electricity and sanitation.

By 1952, only two couples, the Hoods and the McLarens, remained. Early in 1954, the last inhabitant, 74 year old George Hood, departed. The village was left to the mercy of the Territorial Army, Alcan Chemicals, the weather and the vegetation.

(Please click here for more information on the Hood family.)