Part 2 - The Kirkton Churchyard and the Last Laird of Inchdairnie

Burntisland is very fortunate in having that priceless medieval site, the Kirkton Church and churchyard. With buildings which probably date from the early 13th century, it should in its own way be as great an attraction as the church in East Leven Street.

As we saw in the previous article, the Kirkton churchyard in the 1500s would be the traditional Sunday setting for what we would now call an outdoor market. Around that time, burials would take place only inside the church - and then only those of the rich and privileged. Ordinary folk would be buried elsewhere in long forgotten graves.

Over the period to the end of the 17th century this would all change. One of the results of the Reformation was an edict in the 1560s prohibiting burial in church and giving everyone the right to their own lair in the local churchyard. At the end of the 17th century, the holding of the Sunday markets was made illegal. Market traders gave way to the dead. We do not know exactly when these changes occurred at the Kirkton, as the very early headstones and markers, even where they existed, have long since disintegrated. The oldest headstone in the churchyard (as opposed to the church) for which I have firm evidence is that for one John Kent who died on 8 December 1626.

Partly because of its development as a burgh, Burntisland escaped the fate of its near neighbours, Aberdour and Dalgety, where the major landowners exercised almost complete control over local affairs. This difference can be seen particularly at the end of the 16th century, when the town burgesses led the movement for the new church in East Leven Street. There was no great enthusiasm from the major landowners for this eminently sensible development - but the new church went ahead, after something akin to a unilateral declaration of independence by those in the rapidly developing harbour and High Street area.

The landowners (or heritors, as they were known), who were used to having their own way in church matters, refused to contribute to the minister's stipend until 1632, when they got a guarantee that the minister would also preach at the Kirkton. The country folk, too, preferred the old church, and helped to make a viable congregation, allowing the two churches to operate in tandem for many years. Eventually the Kirkton buildings fell into disuse, and the main part, the chancel, became the "Burying Ground of Ayton of Grange" (as the inscription above the door says).

The Ayton or Aytoun family originated in Berwickshire. Their influence spread to Fife and in 1539 a branch of the family was granted lands at Inchdairnie, near Kinglassie. They prospered, and acquired other estates at Cardenden and Saline, and, around 1600, the estate then described as "Over Grange at Kinghorn Wester" - the Grange estate at Burntisland. They also had property in the south of France, where they spent much of their time.

In the aristocratic custom of the day, they intermarried with the rich and famous, including the powerful Wemyss family. They produced enlightened farmers, military men, advocates and literary figures - one of whom is credited with the version of "Auld Lang Syne" which Robert Burns subsequently adapted. 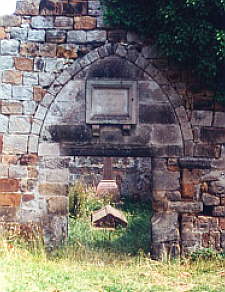 I am told by a present day family member that Aytouns were buried at the Kirkton from the early days, including James Aytoun who died in 1630. There is no trace of the earlier burials, but two later members of the family have most impressive memorials in the former chancel. One of these is Roger Sinclair Aytoun, the "Last Laird of Inchdairnie" (as he is described on his tomb). The other is Roger's mother, Margaret Anne. [In the picture, Roger Aytoun's tomb and the base of Margaret Anne's memorial can be seen through the doorway of the former chancel.]

Roger was born in 1823, and inherited the family fortune at the age of eight on the death of his father. He had an eventful life, including a spell as the Liberal MP for Kirkcaldy from 1862 to 1874. In the early 1870s he presented the Inchdairnie Trophy to Burntisland Golf Club and this seems to have given a fillip to the game in the town. The first contest for the trophy took place on a course at the back of the Binn, on land which at that time belonged to Roger Aytoun. The trophy is still played for annually at an "away" venue.

However, despite his achievements, Roger Aytoun had a serious weakness - a reputed addiction to gambling - and this led to his spectacular bankruptcy at the turn of the century. Great swathes of Fife went under the hammer at a London auction house on 18 December 1901 to pay off his debts. The Grange estate went too. At that time it comprised the Binn, Silverbarton Hill, the Grange and Kilmundy Quarries, Craigkelly and Grange farms and the principal estate residence, Grange House - a snip at £19,000 for the lot. Having lost everything, including his beloved Inchdairnie, Roger Aytoun retired quietly to London. He died there on New Year's Day 1904, and was interred in the family burial ground at the Kirkton, Burntisland.

The other family with an impressive presence are the Youngs, who have the enclosure in the north west corner of the churchyard. They were farmers and, from 1767, brewers and distillers. They owned lands at Colinswell, Newbigging and Dunearn; and to the east of Grange farm, where they built the Grange Distillery. They also appear to have leased Grange House from the Aytouns, for use sometimes by themselves and sometimes by distillery employees. Much of their story was told in the Burgh Buzz of  January 1999, and I will avoid going over the same ground again. [See Distillery page for the articles which appeared in the Burgh Buzz.]

Unlike the Aytouns, their permanent base was Burntisland, and they were more involved in local affairs - for example, William Young was Provost from 1831 to 1834. They were also more generous, gifting the Music Hall (rather unimaginatively renamed the Young Community Hall) to the town in 1869. The plaque in the hall records: "This hall, erected and fitted up by Joseph Young Esq and John Young Esq at their joint expense, was presented as a free gift to the town of Burntisland, 1869." They had a street named after them - Young's Wynd, which later became Lothian Street. Robert Livingstone suggests that this was because they had the street widened, to allow easy passage of cattle from their farm to the ferry.

Unfortunately, as is usually the case, there are few records of the more humble folk interred at the Kirkton. There are the headstones, of course, but these deteriorate over time. A list of the names appearing on them, from a survey carried out about 1970, is at the end of this article. There is also a register of interments for both the Kirkton and the East Leven Street churchyards, covering the period from 1872 to 1935, which was discovered by chance five or so years ago in the loft of the cemetery lodge in Kinghorn Road. The original was deposited with the National Archives of Scotland in Edinburgh, and a copy is available for viewing at Burntisland Heritage Centre.

The register contains some interesting entries. On 26 June 1872, for example, Thomas Gray was interred at the Kirkton - the son of James Gray, maltsman at Grange Distillery: "this boy murdered by his mother while out of her senses, by drowning in a tub". And on 3 August in the same year, the unnamed 33-year old wife of Robert Robertson, late of Kirkton, was buried there, having "died of smallpox in Edinburgh".

We also know something of the last person to be interred at the Kirkton. Tom Hewitt, who lives in Florida, told me recently that his great grandmother, Helen Mackinnon (widow of John Donaldson), was the last person buried there. She died on 30 May 1936, and Tom was told that the cemetery, which had long been closed for interment, was reopened specially to allow Helen to be laid to rest beside her late husband. A local newspaper of the day reported the occasion: "The funeral of Mrs Donaldson, who was 90 years of age, took place Tuesday afternoon and was attended  by a representative turnout of old friends and residents. Mrs Donaldson's burial is the last that will take place in the ancient Kirkyard of the Kirk, built over 700 years ago and originally known as the Kirk of Litel Kingorn." The Florida family also remember their Uncle Dan Donaldson, Helen's son, who lived above the Old Port. According to the late Jimmy Wilson of Kinghorn Road, he was the foreman with a firm of ships' chandlers in Harbour Place who supplied the stevedores at the docks. On board ship, everyone knew when Dan was coming because of the thump/thump of his wooden leg. His nickname was "matter of opinion", after his pin.

To round off, here are a couple of items from Norman Mackie of Aberdour Road, remembered from his childhood. He recalls some older lads unscrewing the top from the Celtic cross memorial to Margaret Anne Aytoun, which is behind Roger Aytoun's tomb. They discovered a cache of coins inside. This happened some 70 years ago, and Norman has no idea where the coins ended up. He also remembers the days when Dollar Road was a cart track. It was more properly called Dolour Road, the road of sadness, along which the coffins were carried on their way to the churchyard.

Finally, here is a list of the surnames featured on the headstones and other memorials at the Kirkton (if on more than one headstone, the number is in brackets):


Webpage by Iain Sommerville; Help on bookmarking this page.