In the 17th century, the persecution of witches was common throughout Europe. This persecution was not confined to Protestant countries, but it was the churches in those countries which displayed the worst excesses. And Calvinist Scotland was at the forefront.

The Scottish Parliament set the scene in 1563, by decreeing that the practice of witchcraft would be punishable by execution. For the following 100 years the Church of Scotland, in association with the civil authorities, implemented the law - sometimes enthusiastically and sometimes grudgingly. It is estimated that, during that period, as many as 4,500 women were executed for witchcraft in Scotland - compared with around 1,000 in England (which had five times the population).

Most of the guilty women were in fact entirely innocent of any wrongdoing. They might be elderly and a little wandered, or perhaps eccentric in some way. They were often what we now call bad neighbours, and prone to cursing and swearing. But they could be accused of witchcraft on the basis of a single complaint to the Church by a local person with a grudge against them.

Several towns in Fife gained notoriety for the severity of their witch-hunting - Burntisland, Dysart, Inverkeithing and Kinghorn. The zealousness of the hunting was determined by both the prevailing national climate and local factors.

Some ministers gained a fearsome reputation for encouraging their flocks to seek out and report anyone who might be a witch. One such was the Rev John Smith, Minister of Burntisland from 1643 to 1649. The late John Blyth speculated on his influence: "This man, with his sinister reputation, must almost certainly have been a grim figure as he passed through the streets of our town. One can imagine the children shrinking from his presence, and terrified old women hastening whenever possible from his sight." Such was the power exercised by fanatical ministers three to four hundred years ago, and the climate of fear which was created.

The women of Burntisland would have breathed a sigh of relief when Cromwell captured the town in 1651 - if for no other reason than that he imposed a near-prohibition of witchcraft trials during the period of occupation.

John Blyth did some research on witchcraft in Burntisland, but was hampered by the absence of records from so long ago. However, his limited information does give us a flavour of what happened here during those turbulent times.

In 1648, the unfortunate Janet Brown of Burntisland was put on trial by the Commissioners - a panel of men drawn from the local establishment for the express purpose of conducting witchcraft trials. It was normal practice for a suspect to be interrogated prior to the actual trial - this typically involved forms of torture, perhaps the use of thumbscrews or sleep deprivation. Another grotesque practice was witch-pricking, the insertion of a long pin of wire into the body to test for pain sensitivity and the presence of blood. So common was this operation that a new profession - witch-prickers - came into being, comprising men skilled in the operation and interpretation.

Burntisland's Janet Brown was subjected to witch-pricking. Her alleged crime? - the rather unlikely one of having a meeting with the Devil who appeared as a man at the back of the Broomhills, who was "at wanton play" with two other women, and who "vanished away like a whirlwind". But before he left, the Devil had made a mark on Janet's right arm. This mark - probably in fact a mole or birthmark - was the target for the witch-pricking, and the men who carried it out were the Ministers of Dysart and Auchterderran. They must have been satisfied with their findings, for Janet was found guilty and executed.

Those found guilty were typically ordered to be taken out, bound to a stake or chained to a rock, strangled until dead, and then burnt in pitch until they were ashes. This is probably how Janet Brown met her end. We do not know where these atrocities were carried out, although it might have been in the Lammerlaws area - but no doubt Janet's burning would have been presented as a fine public spectacle.

Old place names can be helpful in pinpointing locations. For example, at the south west corner of Kinghorn cemetery is the Witches' Hill, and an old iron ring there is said to be where the witches of our neighbouring town were chained and burned.

To make matters even worse for the families of those found guilty, they would find themselves liable for the expenses incurred by the authorities in processing the witchcraft cases.

Another Burntisland witch, Janet Allan, had met an even grimmer end in 1598. She was one of the minority who were burned alive. This punishment was reserved for the more troublesome cases.

John Blyth reckoned that the last witchcraft trial in Burntisland took place in 1672. It is also the best documented case, and illustrates the rather ridiculous lengths that the authorities would go to, to try to secure a conviction.

The woman on trial was Elspeth Finlay, who appears to have been a domestic servant to one William Anderson. Mr Anderson sent Elspeth to the local ale merchant to get him a pint of ale. On the way, Elspeth came across Margaret Cowper, who encouraged her to steal a baby's hair ribbon - which she did. On another occasion, Margaret Cowper poured some water on one of Elspeth's fingers, and a tall stranger wearing black clothes and a blue bonnet then put his cold hand on Elspeth's hand. The third piece of evidence was that Elspeth had stolen a drinking vessel from Alexander Ged. At her interrogation, Elspeth admitted that she did not pray to God; and her mother confirmed that her behaviour had always been something of a problem.

That was more or less the substance of the accusations. The accounts of the later stages of this case have been lost. However, as Elspeth is recorded as successfully applying to the church for a reference in 1674, we can safely assume that she was acquitted.

The trial of the North Berwick witches in 1595 is one of Scotland's best known, and was earlier this year [2003] the subject of a television drama documentary. The principal accusation was that the witches had created a great storm, with the aim of sinking the ship bringing King James VI and his new bride home from Denmark in 1590. The king actively involved himself in the trial, and wrote a book on the evils of witchcraft.

James' son, King Charles I, apparently inherited his father's belief in witchcraft, and applied it to his own misfortune - the sinking of his baggage ferry off Burntisland in 1633. Burntisland Heritage Trust takes up the story: "A year later Privy Council records tell of a group of Lancashire witches accused of, amongst other things, causing the shipwreck. Several of them were brought to London for investigation. It is not clear how country folk in England managed to sink a ship several hundred miles away, but it does indicate an official desire to blame the sinking on the Devil's mischief rather than God's judgement."

In Scotland, the last verified witch-burning took place in Sutherland in 1722. Despite strong protests from the Seceders (in Burntisland, now the Erskine Church), the statutes against witchcraft were finally repealed in 1736. 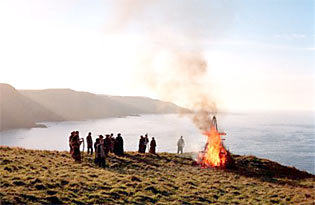 We will never know how many innocent citizens of Burntisland were the victims of judicial murder by the church and civil authorities in God's name. I will hazard a wild guess - perhaps about 20, based on a comparison with the situation in Scotland as a whole. Here are the names of nine of them.


Webpage by Iain Sommerville; Help on bookmarking this page.