After the fire, the building had the misfortune to fall into the hands of a firm of developers who ignored pleas from the local authority to, at the very least, make the façade presentable, and who demonstrated what can at best be described as an irresponsible attitude to local environmental concerns. The paint peeled, the rats rampaged, and the sycamores sprouted.

Eventually the occupiers of the two shop units decided they had had enough and the entire building was left to the mercy of the elements.

Although the cinema was not a listed building, Fife Council hoped that the façade could be saved as the frontage for a new building on the site. However, by early 2008, the structural steelwork within the façade had deteriorated to such an extent that a Dangerous Building Notice had to be served on the owner. The entire building was demolished in May 2008. At the time of writing (June 2008), the site is awaiting redevelopment.

The Scottish Cinemas and Theatres website has a remarkable collection of 65 photographs from the interior of the Palace Cinema as it was after the fire and prior to demolition. Remember to click on the thumbnails for larger versions of the photos.

The old photo on the right shows Miss Mackie, Director and Manageress of the Palace Cinema, pictured in its luxurious lounge. We are very grateful to Norman Mackie for his permission to reproduce the photo.

The prancing reindeer on the panel behind Miss Mackie was a motif repeated elsewhere in the cinema's decor, notably in the stained glass windows in the façade. Immediately prior to the demolition of the building, Douglas Speirs, Fife Council's archaeologist, was able to rescue the one surviving window, as the following photos show. The window is now in the ownership of Burntisland Heritage Trust, and we would be delighted to hear from anyone who might be able to offer an appropriate new home for it. Please contact us. 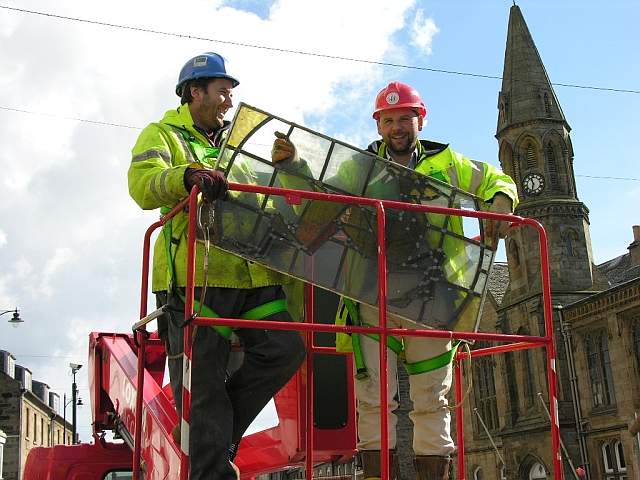 Left - the window from the inside, just before it was removed.
Right - Douglas Speirs (with red hat) and colleague on the cherry-picker with one of the four sections of the window.