A gift of an engraved crystal football was presented to the people of Burntisland from Arsenal FC on Saturday 9 August 2008. Click here for full report by Gordon Ritchie. Photos by Allan Hutchison. 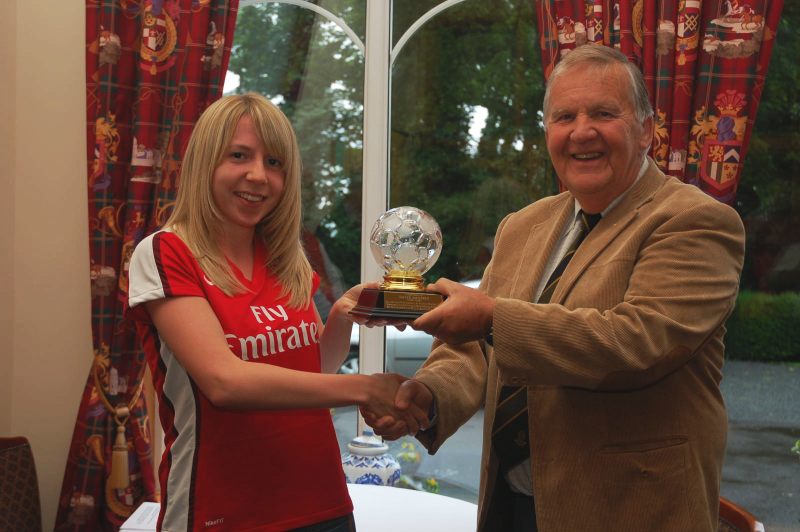 Below - Linsey and Gordon display the crystal football in the grounds of the Kingswood Hotel in the company of representatives of Burntisland Community Council, Burntisland Heritage Trust and Arsenal Scotland Supporters Club. The Arsenal supporters went on to that afternoon's Raith Rovers game as Rovers' guests and were presented to the crowd at half time. 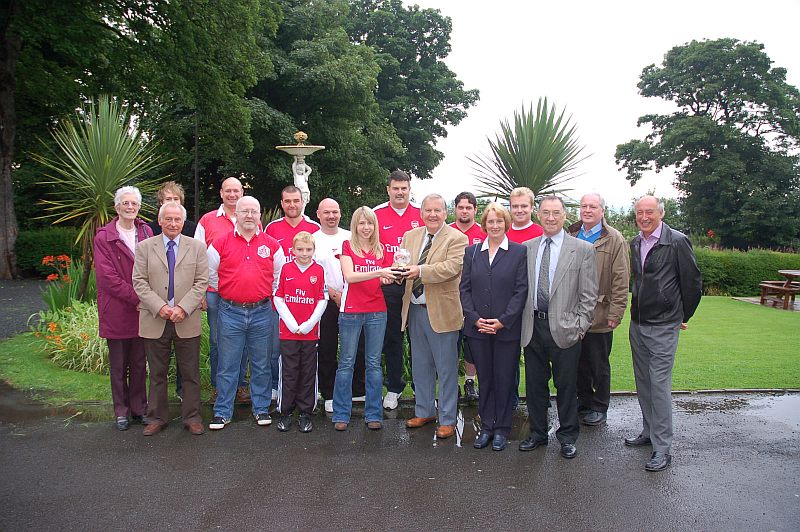 A very special and unique gift of an engraved crystal football was presented to the people of Burntisland from Arsenal FC in August 2008. The giant London football club were so impressed with the fact that a plaque was unveiled in the town in July of the previous year in honour of the David Danskin, one of the founders of the Club, they decided to present a gift to the town just to show their appreciation. The Club asked Arsenal Scotland Supporters Club (ASSC) to come along to Burntisland and make the presentation on their behalf and their youngest committee member Linsey Henderson presented the trophy to Gordon Ritchie, Secretary of Burntisland Community Council, on Saturday 9 August in the Kingswood Hotel, Burntisland. Martin O’Donnell, Chairman of ASSC, said an behalf of the club: “This event very nicely concludes the story of David Danskin and his major part in the founding of Arsenal FC.” Gordon Ritchie in accepting the gift on behalf of the people of the town said: “We are very proud of the fact that the very existence of Arsenal Football Club is down to a ‘Burntislander'." He also indicated that he hoped arrangements could be made to place the trophy in a display cabinet within the Burntisland Council Chambers. Meantime, arrangements are in hand for it to go on public display right away in the Heritage Trust’s current exhibition and also during ‘doors open’ day on 14 September. Ian Archibald, Convenor of the Burntisland Heritage Trust who hosted and organised the presentation, thanked all those who attended and paid tribute to local writer Iain Sommerville and John Burnett, two of the trustees, who spent many hours researching archives to find out all about the Arsenal connection with the town. He felt certain this has been the catalyst in further publicising the achievements of many more ‘Sons and Daughters of Burntisland’.

David Danskin was born in Back Street (now Somerville Street) in Burntisland on 9 January 1863. The family moved to Kirkcaldy in 1864 where David grew up and went to school in the town and later on served an apprenticeship as a mechanical fitter. Although he never actually playing for Raith Rovers, as a teenager he played football for Kirkcaldy Wanderers on the park that was to become Starks Park in 1891 when Raith Rovers moved there from Robbie’s Park (now Beveridge Park).

In 1885, as a 22 year old, David moved to London to work at the Dial Square workshops at the Royal Arsenal in Woolwich, where he formed a works football team known as ‘Dial Square’. Danskin himself actually captained the first ever match on 11 December 1886. The team was later renamed Royal Arsenal, which was shortened to Arsenal by the time the club turned professional in 1891.