Please click here to download an easy-to-print PDF file of this page (2Mb, opens in a new window). 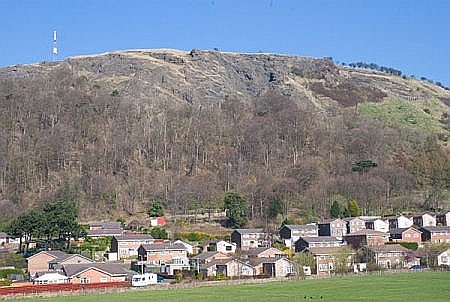 At a mere 632 feet (193m) in height, it can hardly claim to be to be amongst Scotland's giant hills, yet the Binn (Hill), visible from almost every point in Burntisland, dominates the town. Some claim that without this wall formed by the Binn and its westerly neighbour Dunearn Hill, the town would suffer more from cold northerly winds. This claim seems to be reflected in the Latin inscription on the towns coat of arms: Colles praesidio dedit Deus - God gives us the protection of the hills.

Pictured right - the volcanic vent of the Binn dominates the town.

Much of the landscape of the Burntisland area - certainly the hilly parts - owes its shape to the volcanic activity which originated in the volcanic neck represented by the Binn. In terms of age we are looking back at events that occurred some 300 million years or so ago during the Carboniferous Period. The other rocks, less hard in nature, and therefore providing much of the lower ground, are sandstones, shales, thin impure limestones and even a thin seam of coal discovered during the Binnend oil shale industry operations.

The presence of several necks - the Binn itself, Kingswood, Kilmundy and Silverbarton - indicates the degree of igneous activity in this area. Map these necks and you will see an arc forming a semi-circle aroundthe town. In Burntisland proper 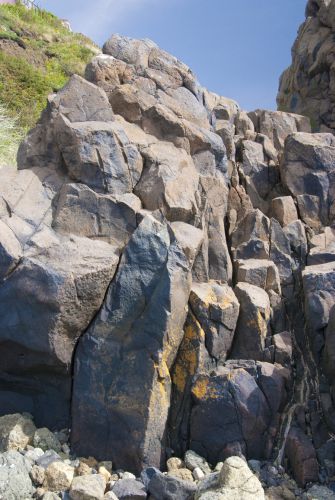 there are several east-west running ridges of higher ground, all composed of either basalt or dolerite and these represent either lava flows or igneous intrusions such as sills. Unfortunately it is very difficult to differentiate between lava flows and sills, or indeed to tell the difference between basalt and dolerite in the field.

The steep scarp slope of the Binn is made up of basalt and in places this rock formed columnar jointing as it cooled, though nothing as grand as the hexagonal columns of Giants Causeway in County Antrim. Alas, weathering has taken its toll of this rock and it is very crumbly, necessitating the construction of avalanche-type fences to prevent the inevitable downward movement of loose boulders. Extensive planting of trees on the eastern face of the Binn has been designed to stabilise the rock face.

Further examples of columnar jointing can be seen at the small rocky crag between the two beaches at Pettycur. Here, too, the basaltic rocks have been heavily weathered and piles of boulders at the base of the promontory testify to the frequent rock falls.

Below the Binn the first of many ridges we encounter stretches from the abandoned Greenmount Hotel, along Black Jocks Hill and continues along the back of Aberdour Road. A small exposure of this rock could be seen at the top of Cromwell Road adjacent to the East Toll roundabout, but has now been walled over. Here the rock is teschenite, a variety of dolerite. Typical vegetation cover for dolerite is whin, as on Black Jocks Hill, much of which disappeared with the construction of executive-style homes on the hill in the 1970s.

Further seawards we encounter a second, roughly parallel ridge, starting at the Erskine U.F. Church, rising over Craigkennochie and continuing over East and West Broomhill. Here again it is the south-facing slope which appears to be the steepest. Not all igneous outcrops are large, as witness the small hill on the Links, inaptly named the Big Knowe, much beloved by winter sledgers. 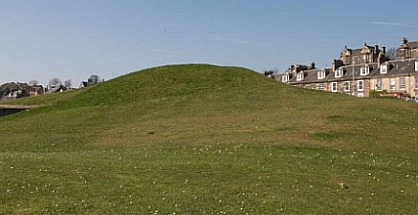 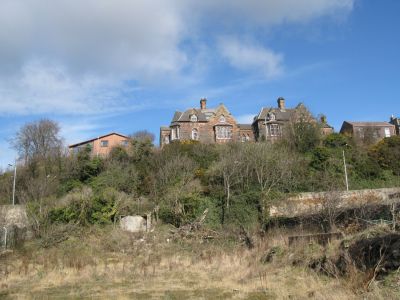 Above left - hard rocks form the Big Knowe on the Links. Above right - a gap in the High Street where the old Palace cinema used to be affords a unique view of the ridge of Broomhill.

Another exposure of dolerite - and a very obvious one, since there is less building here - is the Lammerlaws promontory, which has an eastern extension in Burntisland Bay represented by the Black Rocks outcrop. At the Lammerlaws th

e dolerite is badly weathered, displaying a typical reddish-brown colour as the iron oxide in the rock is exposed to water and air. Once again, we find areas of whin bushes so typical of areas of this rock type. The houses perched on the igneous outcrop overlooking the old railway marshalling yards behind the breakwater look to the old Parish Church sitting on the bluff formed by the sill. This steep-sided outcrop then continues westwards to Rossend Castle.

Pictured left - the doleritic sill at the Lammerlaws gives these houses a commanding view over the surrounding area.

Below - spheroidal weathering of badly eroded dolerite at the Lammerlaws. The hammer measures 30 cm in length. 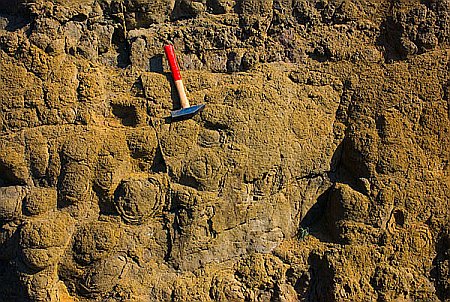 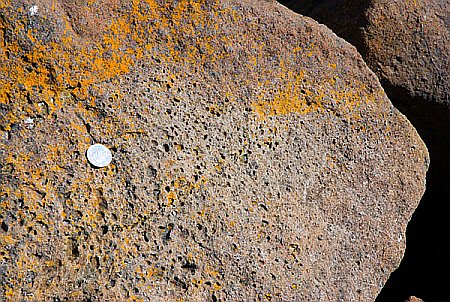 Close examination of the faces of some of these dolerite blocks shows the presence of tiny holes, resembling a slab of gruyere cheese. These holes, termed vesicles, are caused by escaping gas bubbles and tell us something of the formation of the rock. Vesicular lavas occur at or close to the surface when originally formed since the gas would not have been able to escape had it been trapped by overlying rocks.

Pictured left - the 10p coin gives scale to the tiny holes in the dolerite caused by escaping gas at the time of its formation.

Economically, the most valuable rock in the Burntisland area was the shale, which was most abundant on the lower slopes of the eastern part of the Binn. These shales began their life as muds deposited in a vast lake thought to extend from Midlothian to the Burntisland area. Most importantly, the shales were heavily impregnated with oil which could be extracted by crushing plants. Shale mining operations were established in West Lothian in the mid-19th century and in 1878 the Binnend (later Burntisland) Oil Company was established, but was destined to last only fifteen years or so.

Outcrops of sandstone in the Burntisland area are rare. In most areas buildings or farmland obscure the nature of the underlying rock. One small exposure of the dull grey sandstone is to be found at the top of thefootpath leading from 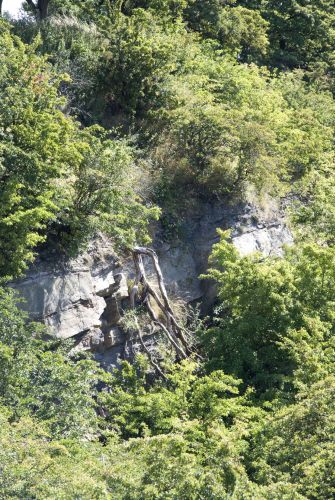 Kirkcaldy Road, starting just beyond theclubhouse of Burntisland Golf Club and finishing where it reaches the site of the old Binnend village. The rock, to the right of the path, was known to generations as Eagles Rock.

This does not mean that sandstone cannot be seen in Burntisland. On the contrary, a simple examination of many of the burghs older buildings reveals sandstone as the main building material. Most of Burntislandsbest known buildings were built of grey sandstone: the Public 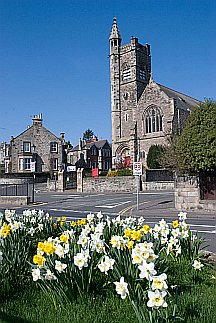 Pictured left - Erskine U.F. Church, one of many of Burntislands older buildings (1903) built of grey sandstone.

Maps, both old and modern, show a series of quarries in the Burntisland area and these, like railway cuttings and coastal cliffs, are invaluable for revealing the underlying rock of an area. Active operations have ceased in these quarries and many have been obscured by buildings or the relentless growth of vegetation.

One of the largest quarries was that found at the Grange, situated some ¾ of a mile from the town centre, just off the Cowdenbeath road. Those following the footpath up the Binn hill towards the small pond will be aware of past mining operations - in this case high-quality sandstone and limestone. Close to the Grange quarry old maps indicate a whinstone quarry near the Kilmundy volcanic neck. The term whinstone is often used by quarrymen for any hard igneous rock such as basalt or dolerite, used as a road building material.

Burntisland owes much to its volcanic past. Anyone who has toiled up Broomhill or Craigkennochie cannot be unaware of the steep ridges they occupy. Less obvious, but of the same volcanic origin, are the uphill routes to the railway station from the High Street, or the double climb from the High Street to the Toll Park via Cromwell Road. Quite unmistakable are the Binn, Dunearn Hill and the Black Rocks. The process of fashioning the landscape continues with coastal erosion at Pettycur and the accumulation of sand stretching to the Black Rocks. 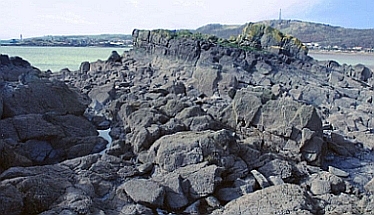 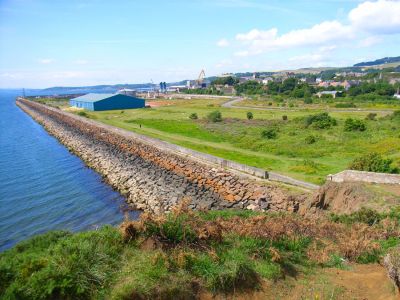 Basalt - Igneous rock similar to, but finer grained than dolerite, and often associated with lava flows.

Columnar jointing - Under certain conditions basalts form columns of rock as they contract on cooling.

Igneous - Term applied to a once molten rock.

Intrusion - Feature formed by an igneous rock pushing its way into other rock(s).

Sedimentary rock - Rock formed from the disintegration of other rocks, or fromorganic remains. Typically rocks such as shale, sandstone, coal and limestone are much softer than igneous rocks and are more easily worn away.

Shale - A fine-grained sedimentary rock formed by the compression of clay, silt or mud.

Vesicle - Cavity in an igneous rock caused by escaping gas bubbles as the rock cooled.

Volcanic neck - A lava-filled passage at or near the surface of an extinct volcano.

Weathering - The process of the decay and break-up of rock caused by the physical fracturing or chemical decomposition.

Allan, Douglas A.: The Igneous Geology of the Burntisland District, Transactions of the Royal Society of Edinburgh, vol. 53, part 3, 1924. (This publication can now be viewed online - please click here (opens in a new tab or window).

Geikie, Archibald: On some Special Indications of Volcanic Action in the Carboniferous Period at Burntisland, Firth of Forth, Geological

Keddie Law was born and brought up in Burntisland, graduated MA Hons (Geography) at Edinburgh and until his retirement taught Geography and Geology in Angus.