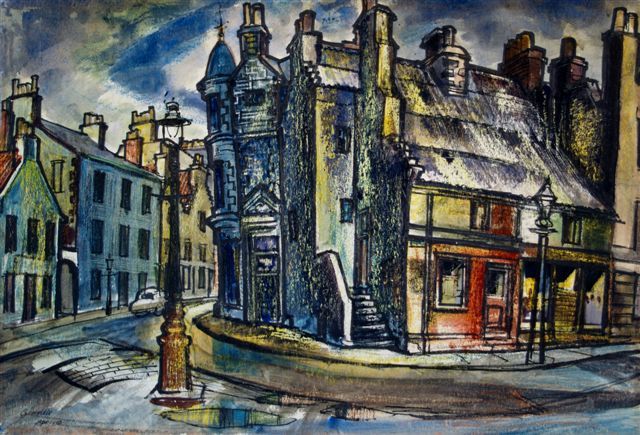 This striking and evocative image of the Green Tree public house and surrounding buildings is a copy of a painting by the distinguished artist and calligrapher Tom Gourdie, and is dated April 1950. The original painting is approximately 22" x 15", and is owned by Tom's son, also Tom. The Green Tree public house (centre left in the picture, with the turret and classical entrance) was at the corner of the High Street and Harbour Place, and in 1950 was owned by Ann McCall. It closed some years ago, and the building was converted to flats. The distinctive exterior of the building is however largely unchanged. The building on the right (with the short staircase on its left side) was demolished in later years, but was replaced with a replica which is very similar to the original.

"The painting was by my father, Tom Gourdie, artist and calligrapher, who died in 2005.

During the 1940s and 1950s he made a special study of street scenes, views and industrial buildings which he sensed would either change or disappear completely through development and demolition. Most of his work is centred on Kirkcaldy and Dysart but he also did paintings of other places in Fife such as the mills at Leslie and the long-lost coalfields surrounding Lochgelly and Cowdenbeath. He had a particular liking for Burntisland and apart from The Green Tree he also did paintings of Rossend, the shipyards, and Somerville Street.

In connection with The Green Tree painting he stated in an article in the January 1974 edition of The Scots Magazine that: '(The Green Tree) ... was recorded one cold Easter when it snowed and sleeted as I painted. ... The Green Tree must have been a very welcome pub for the host of thirsty shipbuilders going home after slogging it out for hours in the yard at Burntisland."

We are grateful to Tom for the image and the background information. Further information is available here.