In 1999, Helen Mabon, a Trustee of Burntisland Heritage Trust, wrote an article for the Burgh Buzz on the extraordinary life of Petronella Hendrick. Helen revised the article in June 2020 and the new version appears below. At the bottom of the page is a copy of the obituary for Petronella which appeared in the Fifeshire Advertiser.
It is interesting to note that further recognition of Petronella and also of two other former Suriname slaves with Burntisland connections has resulted in entries for all three being included in the New Biographical Dictionary of Scottish Women, published in 2018. As well as Petronella, there are entries for Harriet Balfour (c1818-1858; sister-in-law, and also full cousin, of Robert Kirke - see article below) and Classina Mary Macdonald (1855-1906). Classina's father, Gordon Macdonald, fellow slave owner and good friend of Robert Kirke, died in Burntisland and is buried in the Kirkton Churchyard in the town. Classina died at Strathtay, near Pitlochry, and her name was added to her father's memorial. It is likely that she is also buried at Kirkton.

There is a headstone (pictured right) in Burntisland Cemetery that reads:

FOR OVER 60 YEARS THE FAITHFUL AND DEVOTED
NURSE AND FRIEND OF THE FAMILY OF
ROBERT KIRKE,
OF GREENMOUNT, AND NICKERIE, SURINAM.

GONE TO THE HAPPY LAND

Intriguing! Who was Petronella Hendrick? Where is Surinam?

The Kirkes were the most influential family in Burntisland at the turn of the century. Robert Kirke built Greenmount. It is said he had such authority that he insisted on flat roofs of the houses at the east end of Kinghorn Road so as not to interrupt the view from Greenmount. His son, David James Balfour Kirke, was Provost of Burntisland from 1912 to 1919.

Surinam remains Surinam(e) and is in South America – sandwiched between Guyana and French Guiana on the Atlantic Ocean (see map).

Petronella was born a slave, given the name of her Dutch colonial owners as was the custom; probably a Creole Negro born in the colony, her forebears having been brought forcibly from Africa.

In 1852 or shortly after, Robert Kirke decided to return to Scotland. Pete came to Burntisland with Robert Kirke and his family, ostensibly to look after their children. As slaves were not allowed to leave Surinam, Kirke had to submit a special petition to the Dutch colonial government, requesting that Pete be formally freed. The petition was granted, and Pete became a free woman on 28 February 1852.

Surinam has a rainy tropical climate. Temperatures normally range between 73º F and 88º F. There are two rainy seasons and two dry seasons. How must Petronella have felt coming to Burntisland and our climate?

They lived first in Hilton, a large house (now four flats), in Kirkbank Road, the road which appears to bear their name. Pete had a little annex to herself which has since been converted into a garage.

The Kirke family settled in the beautiful house Robert Kirke had built for them, Greenmount (pictured below, circa 1906; demolished in April 2014). The inside was full of glorious wood paneling all from Surinam, or "the Demerara" as the Kirkes always referred to their former home. Extensive  grounds included an orchard and banks of greenhouses where grapes, nectarines, peaches, apricots, tomatoes and figs were grown. The head gardener lived in the lodge at the bottom of the drive next to the stables and managed twelve gardeners. 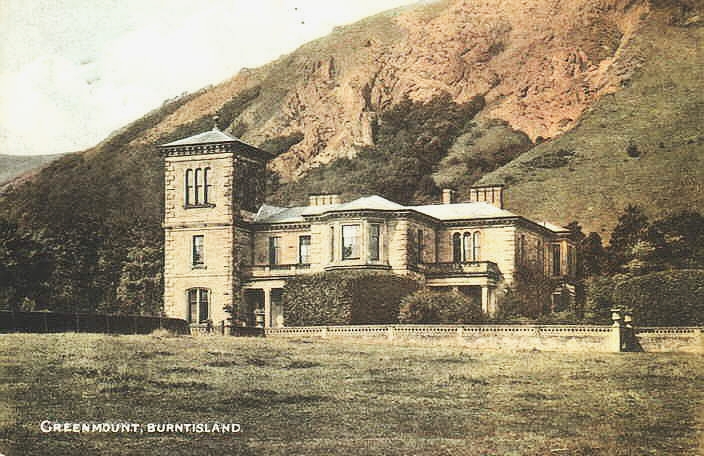 Robert Kirke’s father originated from Crossford and had never lost his accent. The late Mrs Scott Christie remembered Pete: “taking the children to the beach; she spoke with a broad ‘Fife’ accent”. The granddaughter of the then head gardener of Greenmount recalled that Pete was always smiling, was very popular and well liked: “She was very black. When older her tight curls turned pure white and she always dressed them with a red bow.”

After the children had grown up Robert Kirke offered to pay Pete’s passage back to Surinam and to get her a husband. She refused the offer saying her place was looking after the Kirkes. That devotion was reciprocated as her headstone testifies.