As well as writing the article below, Helen Mabon delivered a short piece on Mary Somerville on STV's "Live at Five" programme on 18 February 2016. It is well worth viewing and can be seen on YouTube by clicking here (just over three minutes long; opens in a new tab or window). 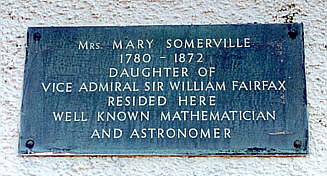 The plaque on the building at 30-31 Somerville Square*, Burntisland, states:
[*formerly 26-28 Somerville Street]

Such a modest tribute to so great a woman.

Although born in Jedburgh on 26 December 1780, Mary lived as a child and a young woman in Quality Street between the Kirk and High Street. Quality Street was a name frequently bestowed on streets housing a community's hierarchy. She was to be at the forefront of knowledge on philosophy, mathematics and astronomy. This at a time when education for women was discouraged.

Mary's father had a notable naval career, but was at sea for long periods. Her mother, Margaret Charters, allowed Mary a very free upbringing, only ensuring her daughter read her bible and said her prayers. She allowed Mary to roam unfettered outdoors; the beach and Lammerlaws would be as familiar to her as you and me.

During a winter spell in Edinburgh when she was thirteen Mary first studied simple arithmetic. At this time she accidentally came across intriguing symbols. Algebra. With the help of books from her brother's tutor she was captivated and read all she could to advance her knowledge.

Recorded as being very beautiful, at 24 she married her second cousin Samuel Greig, son of Admiral Samuel Greig - "The Father of the Russian Navy". Samuel Greig junior became the General Consul for Russia in Great Britain. He had little respect for erudite women but did not interfere in his wife's ongoing studies in maths and science.

Within three years Mary was mother of two boys and a widow.

The death of her husband, though tragic, left her emotionally and financially free to continue her studies. She was now a student of Issac Newton's Principia and corresponding with Scotsman William Wallace a mathematics master at a military college.

At the age of 32, shortly after her second marriage to her cousin Dr William Somerville, she acquired a small library of books on Mathematics, Mechanics and Astronomy. Dr Somerville, a surgeon in the British Navy, was very supportive of his wife's intellectual ambitions despite some family opposition. They had four children together.

In 1826 after carrying out scientific experiments on magnetism she presented her paper to the Royal Society. Its favourable reception showed her to be a skilled scientific writer earning respect from her colleagues. 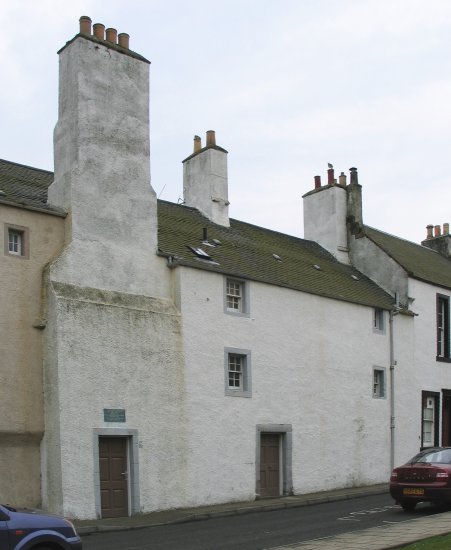 She and Caroline Hershel were elected in 1835 to the Royal Astronomical Society, the first women to receive such an honour. In 1831 Mary published her first book "The Mechanism of the Heavens", which was a great success. Invitations to membership of scientific bodies in America, Italy, Geneva, Dublin, etc. followed. Her second book "The Connection of the Physical Science" ran to at least nine editions. In 1848 her "Physical Geography" was published. She was denounced from the pulpit of York Cathedral for some of the views in the book, which ran contrary to the biblical account of the Creation. The book was used in schools and universities for the next fifty years. More books followed, the last being published when she was eighty nine, the same year she completed her autobiography.

She died peacefully in 1872 in her 92nd year in Naples, where she'd made her home, still actively using her brain to solve mathematical problems until her death. After the last war her grave in Naples was moved from it's original position, which had suffered some bombing. She now lies with her daughter overlooked by a magnificent portrait statue in Naples.

Other aspects of her fascinating life show her to be a competent water colourist. She was a close friend of Sir Walter Scott, Michael Faraday, Sir John Herschel and Sir William Edward Parry, the Arctic explorer. She even made the orange marmalade for one of Sir William's expeditions. She attended the coronation of George IV and Queen Victoria and although a Presbyterian was presented to two Popes.

Many honours were bestowed on her. She was given a pension of £300 a year by the King "to encourage others to follow the bright example which she had set". Her bust sits in the great hall of the Royal Society in London. Named after her is Somerville College in Oxford University, an Arctic Island and a girl's college in Brisbane, Australia. A ship was built in Liverpool, called Mary Somerville and carried her image as its figurehead. And in her native Burntisland, Quality Street was renamed Somerville Street. [Mary's house is pictured right.]

During renovation work by Fife Council in the early 1960's, a strange coincidence occurred. The ceiling of the bedroom where Mary Somerville slept at 30-31 Somerville Square was removed to reveal a second ceiling with a magnificent painted representation of the planets and stars. Mary had studied these constellations in depth without knowing of their existence above her bed. Historic Scotland 'rescued' the ceiling and have it in store. Although in pieces, much of it is in good condition. Historic Scotland are keen to have it refurbished and returned to Burntisland.