The Burntisland Vitriol Works at the Lammerlaws was one of the town's early industrial undertakings. We know from The Statistical Account of Scotland, written in the 1790s, that there was a vitriol works in Burntisland in that period. The Burntisland minister of the day wrote: "There is, at present ... a vitriol work, upon a small scale, but, having lately become the property of some gentlemen of much industry and spirit, it is to be extended, and will most likely do well." The vitriol works seems to have been a significant undertaking for a number of years. It is clearly marked on the following map dated 1813.

Hard times must have followed not long after, though, because we learn from the New Statistical Account of Scotland (1836) that: “The vitriol work, which was in operation when the last Statistical Account was written, has been long suspended, and the premises have been converted into cottages for the summer visitors.”

The location of the works was in the area of the present-day group of houses known as South View and North View, Lammerlaws. South View is shown on the photograph above. In the days of the vitriol works, the cliff in front plunged directly to the sea, the land in the foreground having been reclaimed a century later.

The painting above, by S. Humble, shows Burntisland in 1834. Chris Hill, a Lammerlaws resident, believes that the buildings on top of the cliff at the extreme right of the painting might well be the only extant picture of the vitriol works.

A reminder of the vitriol works came to light in 2002, when Trevor Wadman sent us the following images of a token he had discovered. Trevor is a metal detector enthusiast, and scours Prince Edward Island in Canada, looking for interesting artefacts. He got in touch with us to ask if the token could have started its journey here in Burntisland. 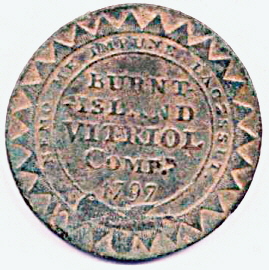 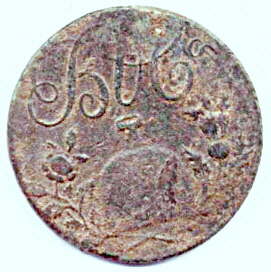 Local historians Andrew Young and Robert Livingstone both made reference to the Burntisland Vitriol Company token of 1797, and Young said that it was later referred to as the Burntisland Halfpenny. We are quite sure that Trevor's token was indeed issued by the owners of the vitriol works here in Burntisland.

Here is Trevor's account of his find: "[The token] was found on Sunday, October 13, 2002, in a field near an old (for our area) settlement called Bedeque ... on Prince Edward Island. This field is actually across a river from the original Bedeque settlement area. All of the items we found that day were in a roughly square shaped area approx.100 feet by 100 feet. We found a total of 20 coins including George III half pennies, and one penny tokens dated 1775-1806. Also found were approximately 60 civilian buttons, three thimbles and other odds and ends. Most of the coppers we find here are in bad shape due to salt spray soaking into the ground and, even worse, fertilizer spread by the farmers. This token is one of the, if not the, best conditioned copper from that time period that I have found."

In an interesting coincidence, an identical token was found earlier in 2002 by the brother of Burntisland man John Keane. It was found under the floorboards of a house near Abernethy in Perthshire. John took it along to the Burntisland Heritage Trust and showed it to a delighted Ian Archibald, Convener of the Trust. Ian was even more delighted when John offered the coin for display at the Heritage Centre!

In June 2007, we received an email from Vlad in the Crimea with news of another Burnisland token found there: "The token 'Burnt-Island vitriol comp', 1/2 penny, was recently found in Sevastopol. Probably - on the territory of the Brittish camp, 1854-1855. The geography of this private money seems to be even more wide."

Between 1787 and 1817, privately-issued tokens were common in Britain. By the end of the 18th century there was a severe shortage of copper and silver coins, so that many firms had difficulty in obtaining enough currency to pay wages. This led to a growth in payments in kind, use of foreign coins, and unofficial tokens. The token manufacturers greatly expanded the amount of currency available. At that time, use of tokens, foreign coins etc probably exceeded that of official coins. Some of the chief engravers at the Royal Mint made a good profit from selling new designs (not the official ones) to the token manufacturers. (Source of this information - 'A Comparative Chronology of Money'  by Roy Davies and Glyn Davies.)

On the east of the Lammerlaws promontory are the remains of a lime kiln. Andrew Young and Robert Livingstone both linked this to the vitriol works. We can't ourselves see any logical connection between the production of lime and the manufacture of sulphuric acid. If anyone can shed some light on this, we'd be pleased to hear from them. Perhaps the same company simply diversified. Limestone was mined in the area - notably at Newbigging - until as recently as 1953.

Whatever their historical background, the ruins of the lime kiln are still an impressive sight. The photograph below was taken by Burntisland resident Stewart Glasson in September 2007.

Stewart's main reason for taking the photo was to highlight possible danger to the ruin. He commented: "I attach a photograph taken today [13 September 2007] which shows that the hillside close to the shoreline has subsided to the extent that the base of the historic Lime Kiln ruin is now only a few metres from the edge. This area is not subject to any appreciable tidal erosion as far as I am aware but the distance from the ruin to the edge does seem to have reduced significantly in recent years."

Ainslie's map of 1776 identifies the headland as Clayness and clearly annotates a building on the headland as 'Lime Kilns'. However, although an abundance of limestone is mentioned in the Old Statistical Account for the parish as written in 1791, there is no mention of a lime kiln.

Looking at the ruins of the structure, it appears to me to represent a classic mid to later 18th century stone-built two or three flue shaft kiln.

Built on a slope with the head of the kiln shaft at the summit of the Lammerlaws headland, the limestone and fuel would have been transported by bogey railway to the kiln head and dropped down the shaft, burnt, and the lime raked out from the ashes of the flues below before being exported on ships via the nearby harbour.

In summary, this ruinous structure looks like a classic rubble-built c. 1760s [but see below] small industrial lime kiln complex to me.

There is a plan in the National Archives of Scotland (RHP.2602), which from the inventory description of the plan, sounds like it marks this kiln. The plan is dated 1827.

I have also checked out the OS First Edition Object Name Books (the field note books produced by the first edition cartographers back in the 1850s). There is no mention/description of a limekiln (which is strange) but in the account of the Cromwellian period fortification on the headland there is an interesting piece of info:

'The place mentioned as being the traces of an encampment, Mr Davidson and Mr Hutchison say, was a depot for lime, burned in some old limekilns near to it.' (Original Name Books of the Ordnance Survey, Fife, Book No. 135, p.8)

Incidentally, the same source includes a good account of the fort which describes the remnants of walls being stone-built and substantial. Which is quite different from the OSA account, it being described there as small and level on the inside with an embankment towards the sea and open on the land side. There was a slight mound round the edge (presumably the embankment) that at one time was several feet higher with apertures for guns.

I tend to think that Elphinstone's plan of c.1745 is the more accurate description as this shape is repeated on John Thomson's map of 1827 (published in 1832).

Anyway, it seems extremely likely that the stone from the fort was probably used to build the limekilns. Certainly, in so far as nothing now remains of the substantial stone fort that stood there, somebody at some time must have actively brought about its near total destruction and this must have been done before 1854 as the fort is not mapped on the OS First Edition. I'm sure the answer will be hidden in the pages of Burntisland town council minutes of the 1750s/1760s because the Council must have owned the fort and must have given permission to someone at some time to take away all the stones."

Following receipt of Roy Warrander's information (below), Douglas has refined his date for the lime kiln: "I note that Roy Warrander reports a major increase in lime exports from Burntisland in 1752. Although I originally suggested a date of c. 1760s for the limekiln structure, I wonder if the spike in output in 1752 reflects this limekiln's actual construction date and hence the big increase in Burntisland's lime exports at this time? In which case we should probably revise the date of the structure to c. 1750, opening in 1752. I think it likely that Burntisland had an extensive lime industry before the construction of the big draw kiln on the headland. In keeping with the general pre-industrial approach to lime working I imagine that there would have been several lime seams in the area being worked and the lime processed on site using small clamp kilns with the product being carried by waggon to the harbour. What seems to have changed around 1750/52 was the industrialisation of the process. I think once the big draw kiln was erected in c. 1752, quarried limestone formerly processed in clamp kilns would have been brought to the big kiln and processed on an industrial scale, hence the increase in the town's exports."

"I have been engaged for some months in helping an eminent maritime researcher in Edinburgh to analyse old records in the NAS covering ship movements into Leith in the period 1749 to 1752. Over this period, preceding the founding of the lime works in Charlestown which became dominant, all lime imports to Leith seem to come from Burntisland. I estimate there were around 30 individual shipments over this period, around half of these in 1752. From your website, I think you are wondering whether the kiln was built in the 1760s but, from the info I have come across, it looks somewhat earlier." 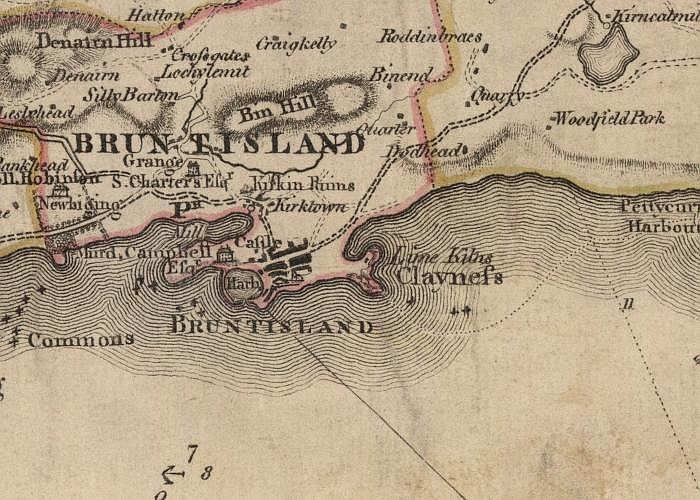 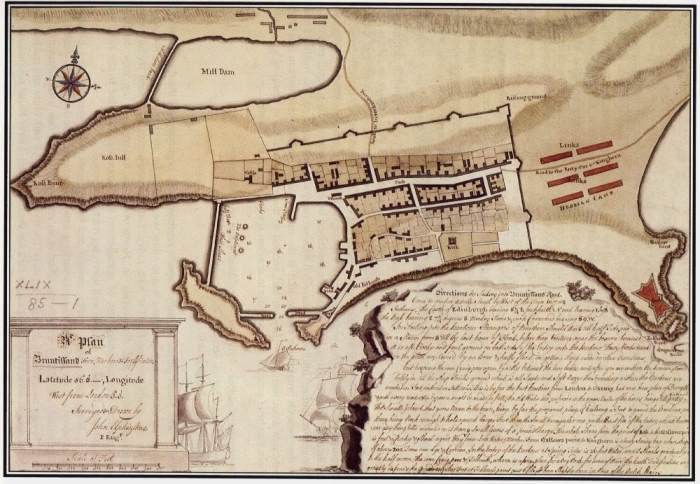